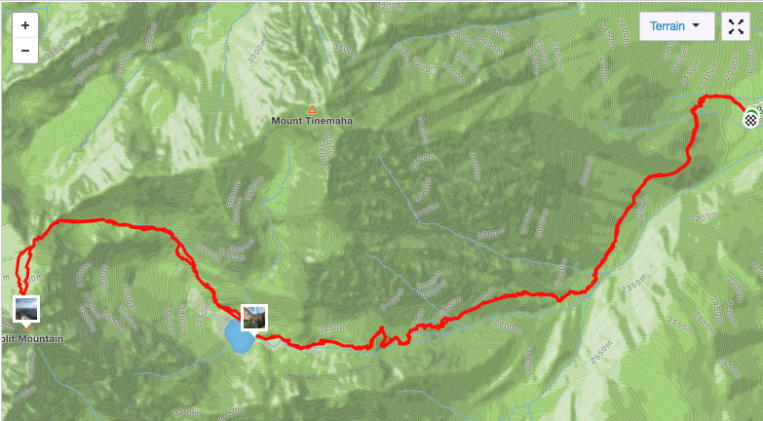 After getting our permit at the White Mountain ranger station in Bishop, we followed the mostly accurate directions to the trailhead that we received from the ranger. We were told that as of summer 2017, part of the road had been completely washed out by a creek from heavy snowmelt about 4 miles from the trailhead, but there “might” be a culvert. The dirt road was a little bumpy and rutted at times, but our Toyota Rav4 did fine just being careful in a few spots Any vehicle with comparable or greater clearance can do it. Fortunately, the dreaded creek crossing had indeed been repaired and a culvert placed, so we were able to drive all the way to the trailhead. This is where the USFS’ directions are no longer helpful.

There is a parking area with a trailhead sign/kiosk near the entrance of the canyon you will be hiking up, but this is not the actual trailhead. There is a very rutted out “road” that goes south towards the canyon and a social trail at the end of it, but this is NOT the trail! Turn around and walk to the north up a spur road that dead ends where the trail begins. The trail in this area switches back through sand and brush. You may lose it at times, but it reappears as you work your way up the hillside. Finally it rounds the shoulder and into the canyon.

The hike to Red Lake basically begins at the valley floor, in desert scrubland. It is VERY hot and dusty, and there is absolutely no shade. A very early start is recommended. This is the hike where we started using the term “Sierra mile,” because there was no way we had only hiked a mile and a half so far!?

Continue to contour along the north side of the canyon on the increasingly overgrown trail. There is steep dirt, bushwhacking, and lots of elevation gain as the trail gradually turns toward the northwest.

The landscape eventually transitions from scrubland to subalpine and the trail moderately improves. Ascend a headwall through bristlecone pines and then follow trail segments as you continue northwest past a lake on your left. Occasional cairns through boulders will get you to the spectacular Red Lake, which has several very nice campsites. According to my Strava, the lake is 4.4 miles from the trailhead. The lake is great for a cold, refreshing swim as a reward for the hot, dusty hike in.

We set up camp and went for a dip as some dark clouds came in. We retreated to our tents and napped as a few heavy thunderstorms moved through the area. The storms subsided and, thinking the rest of the climb would be much shorter than it actually was, started heading for the summit around 3.

Hike around the lake towards the inflow. Your eventual goal is just left of the lowest point on the saddle between Split and Prater. Follow trail segments and occasional cairns through grass and talus as you hike due west.

Looking back on the route above the lake

We encountered a large, soft snowfield here and ascended climber’s right of the rocks through the center. Scramble up boulders and scree above the snow and head towards the obvious U-notch, but turn left just before it and continue up and to the left.

Erik topping out on the saddle, with the snowfield below

Now the rest of the route is mostly in view. Work your way up tedious talus and before too long, you can enjoy what may be one of the best summit views to be had in the area. We summited just before 7 and knew we would be getting back to camp in the dark, but the scenery was well worth a short break to take photos and take in the dramatic surrounding peaks.

A smoky view from the summit

We descended the way we came, made it back to camp just after 9, and had dinner. We awoke early the next morning, took a few final photos of Red Lake, and left around 8 to try to beat the desert heat on the way out. We did not. This was a tough one! Next up, Middle Palisade.

One thought on “Split Mountain via Red Lake”